Here is some new and exciting Galahad related news: Our guitarist Lee is very proud to announce the imminent release of his new single song 'concept' album entitled 'Comatose'. The album will be released through F2 Music and also features, among others, Diane his wife and Mark Spencer from Galahad  on backing vocals.

The album can now be pre-ordered from here: Lee Abraham - Comatose 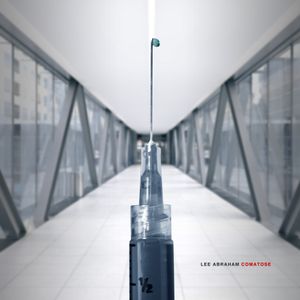 Inspired by his return to Galahad in 2017 and his subsequent contributions to the band’s single-song concept album “Seas of Change”, Lee has written and produced his own single-song concept album. Clocking in at around 47mins Comatose tells the story of a car crash victim who experiences flash backs while medical staff try to save his life. A deep and complex work that takes in a number of musical styles but all the while retaining the overall progressive rock sound.

Lee is joined once again by long-time musical partner Gerald Mulligan (Credo) on drums, Rob Arnold on piano, lead vocal excellence from Marc Atkinson (Riversea, Moon Halo) and backing vocals from Diane Abraham and Galahad colleague Mark Spencer. Artwork is once again co-ordinated by Robin Armstrong. Lee handles all guitars, all keyboards and for the first time since 2009’s “Black and White”, Lee has also recorded all the bass guitar too.

In the past, having previously explored long songs (2016’s “The Seasons Turn”), shorter, more commercial AOR inspired songs (2017’s “Colours”) and concept albums (2004’s “View from the Bridge”), this new single-song album is new territory for Lee. “I wanted to try something different again for the next album rather than just repeat previous work. I hope I have done that successfully and listeners enjoy the ride…… all 47 minutes of it!”